Super Glue: The Breakfast of Champions

There we were, about to sit down to Bud’s birthday dinner and all I had left to do was make the garlic bread. Instead, I sliced the tip of my thumb mostly off. I was using this incredibly sharp and big professional bread knife that I just had sharpened- I bring the knife down from Chicago because I use it to slice felt cane “buttons.”  After I stopped hopping around and whooping, I considered going to the hospital for stitches because they were obviously in order. But there was Bud, on his last night here and Abby (egging me on to the hospital) and Misha, standing by and observing in his quiet Russian fashion. And then I considered that we are without health insurance and, while the cobra clock is ticking, nothing is in place at the moment.  The next plan was to tape it back together- after all, there was nothing remotely jagged about the cut. A quick, clean slice. Hurt like a mo  After bleeding through a couple towels and about a dozen bandages of all shapes and sizes- butterfly, knuckle, big, little- I finally stemmed the flow of blood long enough to get to the dinner table and every one was well into their spaghetti sauce before it started up again. Somewhere in there Misha said quietly, “glue it.” What? “Use glue. It will work.”

Those Ruskies are a clever lot. Further internet research revealed that Super Glue is, in fact, a not uncommon solution to cuts, esp. for those rugged types like backpackers and construction workers and soldiers. I’m not sure it’s meant for reattaching parts but I just want to report that I believe it is working. This is not certain because I have about 8 layers of bandaids also securing the whole mess but after a thorough rinse in hydrogen peroxide hurt like a mo, Super Glue, neosporin and a big wad of latex, I believe the fix is sticking. I’ll check later today, after a glass of wine.

I’m thinking that a little book of home remedies and alternatives to seeing the doctor could be a big seller until we get this national health insurance situation sorted out. 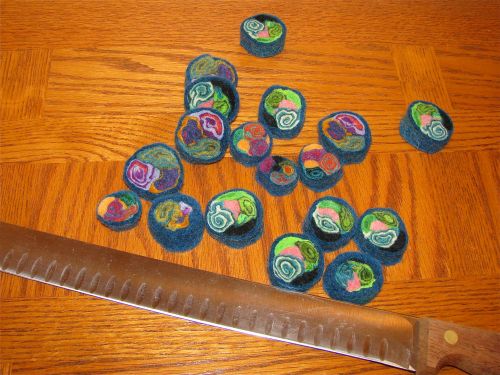 (The offending weapon. I hope there’s no wool lint in this cut.)

In other news, Bud has flown back to Lost Loon Lodge in time for another 6-8 inches of snow, but he called to report that the car started right up and he was home safe and sound. We had a great visit, mostly visiting on the porch and eating in. We went to see the manatee a few times. He really loves the manatee. We went down to Boyd Hills and I took him and my brother on their own private tram tour, pointing out gators, gopher tortoises, ospreys on nests and snakes. Now I’m enjoying a few low key days of quiet and getting ready to teach a felting class. We also have a wildlife weekend coming up at Boyd Hills and I’ll be giving tours and working at the aviary. We’re going to be doing a little fund raising, selling screech owl boxes. I’m also making some of these little needle felted owls to donate but it’s a bit awkward with this thumb deal.

Coming round. I keep looking for my dung beetle buddy, in particular. Rabbit, rabbit?

This entry was posted in Birds of a feather, Friends with Feathers, Lost Loon Lodge. Bookmark the permalink.

22 responses to “Super Glue: The Breakfast of Champions”