It’s been wild and busy around here. I had a couple blue days when there was no evident progress on the house and I was missing Rich and the cats, very much. But my good friend, Kristen, came and we took the River Arts Studio Tour and saw all the fine art and craft that made me want to throw up my hands and say, “I give up!” and then we ate some fine cheese and drank some wine and I felt better. Monday, I got just a tetch wiggy with the builder and unfortunately or no, I was rewarded for my rude and childish behavior because Tuesday EVERYONE was on the job. Same today. Part of the problem was that the builder took a well deserved weekend with his family and the siding guys took that as an opportunity to go watch World Cup or whatever.

So now. Yesterday Rosario mowed the weeds lawn and now it looks ever so much better. Especially if I squint and don’t notice the wisteria, that I loved 6 weeks ago, creeping around everything at the rate of a yard a day. Faster than kudzu.

(This one is for Roxanne, queen of the pumpkin patch.) I saved seeds from various heirloom squash that we ate last fall, plus I sprouted some ornamental gourds and some melons and pumpkins and now I have no idea what is growing here. But they are definitely growing. As of now there are about 200 baby round-ish things growing at the base of beautiful orange blossoms. My sunflowers are blooming and I’ve started a new perennial bed behind the stones on the right. To the left of the vines are raspberries- many, many raspberries. Every morning I snack on sugar snap peas and raspberries. If I had a kitchen I could be making jam. Next year.

Oh! I DO have a kitchen! At least part of one. I love my pewter glazed solid maple custom cabinets. The countertop template has been done and that is a week out. The extra knobs (who knew I would need 38???) are being shipped. The fixtures, sourced by yours truly over a period of months, are waiting in the den, still boxed. I saved literally thousands by searching endlessly for precisely what I wanted and in the end it paid off. I found a brand new 2100.00 Kohler custom cast iron sink and articulating faucet pair for 900.00 from a plumber supply guy who won it for selling the most Kohler fixtures but said he’d rather have the money than put it in his old kitchen. Wait ’til you see it.

It’s all in the details. Dichroic glass pulls. And no, the kitchen is not going to be pastel baby blue. That was a test primer that was supposed to be gray. Much the same way the Cosmic Sea in Rich’s office was not supposed to be rainbow violet. One of the smarter ideas is to tint your primer so you at least have a chance to make corrections. 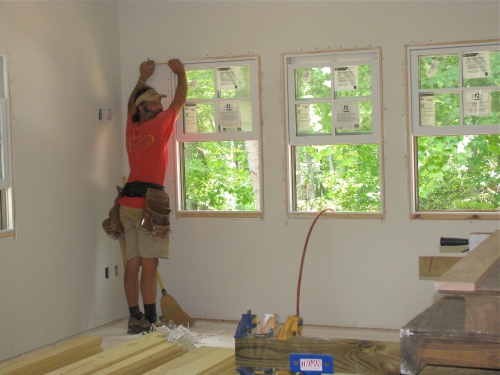 Meet Mike. He is my finish carpenter and trim guy. He also has a degree in horticulture and a brand new baby who entered this world about 10 weeks early but is now doing very well, up to 5# from 2#- something and nursing like a champ. I don’t care if Mike takes all the time in the world to be with his family but he’s on the job in any case. He was just waiting for the truck with the milled trim to show up. 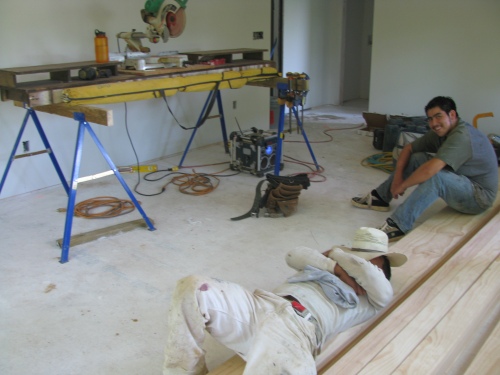 Carlos takes a siesta while waiting for caulk to arrive. When I walked in Rich’s office after he had primed it purple he kept an absolutely straight face while asking, “You like it, no?” and it was only when I said, “WTF!! It’s PURPLE!” did he burst out laughing. Carlos and his wife have been helping to feed Mike while Mike’s wife is busy with the new baby at the hospital. Carlos brings a hot plate and all sorts of tupperware containers filled with Mexican delicacies for lunch everyday. On Monday he will be making us all squash blossom quesadillas (from the garden, naturally) and when the house is done he and his wife will cater our housewarming with a pig roast and all the trimmings. Mario thinks it’s all funny. When I said to Carlos and Mario that there were some jalapenos ready in the garden, they dumped out a coffee can of nails and went running down.

BABE MAGNET ALERT! Okay, this is Gustavo. The picture does not do him justice. Gustavo is from Italy. He loves opera and his daughter works at Columbia University so sometimes he goes to NYC to hear opera at the Met. (I told him about an opera singer I know of who recently debuted at the Met in Der fliegende Holländer.) Gustavo and I talk about Tuscany and olive oil and the proper humidity for making handmade pasta. Yesterday I made him some pesto with the basil from my garden. Gustavo’s grandfather was a tile setter. His father. And Gustavo is doing my tile. When I took his picture, he thanked me, in Italian. He said it was an honor that I wanted to take his picture and pictures of his work. Gustavo is single. 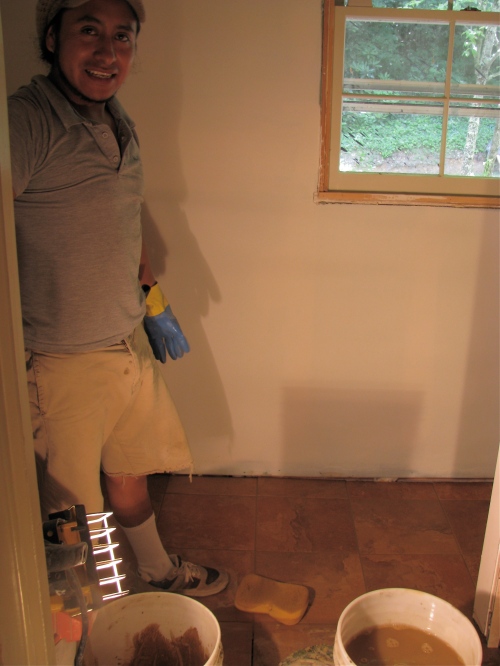 Jose. Also very cute but young. Also working on tile. Gustavo pulled up the back of Jose’s pants before I took a picture. He cuts tile with one of those big saws with running water and it makes me insanely nervous; I have to look away.

Sweet. Very sweet shower. The entire soaking tub surround in this master bath will also have that small glass tile (very expensive, imported from England). In order to justify the accent, I shopped long and hard for remainder lots of high quality porcelain at deep discount prices. I’ve seen every back room of every tile warehouse for two states.(Thank you, Cathy.) 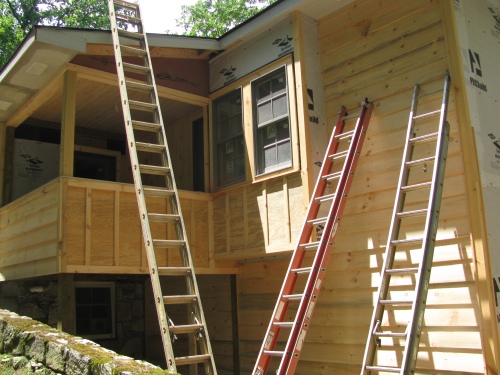 The kitty porch is no different now than it was last Friday. The siding guys are MIA. Apparently they have a new framing job and while I understand the need to take any and all work in this economy, I am, shall we say, irked. The cats are waiting for their porch, dammit. I think Bobby is irked, too. Where is a picture of my young and incredibly capable (and calm in the face of homeowner angst) builder, you ask? He was in town picking up caulk for Carlos and Mario. Tomorrow I’ll snag him and Roxie, the on site mascot.

I miss Rich and the kitties. We had our 7th anniversary on Monday and talking on the phone several times just didn’t cut it. He sent me a long and very thoughtful and loving note about our life together and why it’s okay to be apart this anniversary because we are building for all of our future anniversaries together. He is my late in life lover and soul mate and companion and friend. We are really good friends. I had left him a long “honey-do” list with many dated items: June 4, apply the Advantage Multi to cats, June 8, call Rick to come prune the giant Bougainvillea that overhangs the alley, June 12, write the check for second quarter estimated tax to IRS…On Monday, in the middle of a little romantic telephone schmaltz I asked if he had written the check on the 12th and he said no, he got busy, he would, etc. I scolded a bit and nagged a bit, just so he would really miss me. Yesterday he called and said, “You tricked me! It wasn’t due until the 15th!” I said yes, but now it will be on time. I always said the great thing about being single for a long spell after a divorce is that I settled into being self-reliant and when I did marry again it was because I chose to and not because I needed to be married. Now, seven years in, we need each other.

This entry was posted in Cast of Characters, Pisgah Picayune, The Mountain House. Bookmark the permalink.

17 responses to “Meet my guys”