I wish I had a river*

I like that song. I was listening to Sarah McLachlan’s version of it this afternoon while wrapping a few odds and ends to put under our listing faux tree with most of the lights burned out. All I’ve got to say is it’s a darn good thing I can vaguely, if I try hard, remember the reason for the season. It’s to rejoice about health care reform, right? Just kidding, Bonnie. Earlier in the day, I scrummed around in the back of my brain (and heart) trying to get in touch with the part that fully appreciates the GREAT BIG GIFT but I was also busy chasing down the cheapest and simultaneously least flimsy and cartoonish gift wrap I could find at CVS. CVS is not really the place to get in touch with your inner Christian (Buddhist, Muslim, Hindu, etc.), btw.

It doesn’t feel much like Christmas around here and even though my mother, damn her, has been nagging me to make all 6 of the traditional family cookies, have the perfectly trimmed tree, put an orange in the toe of each and every stocking and put really nice ribbon on every precisely wrapped gift, here are the facts of the matter:

All my cookie cutters and my rolling pin and the Lenox tiered cookie plate are somewhere in Cincinnati and it’s been so long since I’ve seen my “stuff” that got boxed up and hauled off to storage when we left Chicago that I can’t remember if I even like it or want it anymore. Except, now, I miss the hefty smooth wood of my grandmother’s rolling pin and I think that’s the only thing of hers I own so I’m having a little breakdown over the rolling pin. But that’s not the real issue. The real bugger is we have no children or family with us for Christmas this year.

Abigail graduated (with bells and whistles. More on that soon) and left two days later for Russia. She’s with Misha’s family somewhere south, near Georgia and the Black Sea.  They flew to Moscow and then took a 27 hour train ride to his town; that seemed impossibly long to me but when I looked at the maps it started to make sense. They had never met Abby and his family was so pleased to see them that everybody turned out with signs and confetti to greet them at the train station- the parents, brother,cousins and aunts, uncles, neighbors. Abby has sent some pictures and it all looks very close knit and Russian. I can only imagine how happy his mother must be to have him for these few weeks, along with my daughter. But I’m glad for them, that they are able to be there. They both worked a lot of extra hours, especially Misha, so they could go and if their luggage was any measure they took half of Best Buy with them. Abby told me on Skype that the other day they got up at 530 am and that whole big crowd piled into a van and drove to the highest peak in Europe. Except it’s in Russia. It’s Mt Elbrus.

I had to look that one up it was so puzzling and then I also google-earthed it to try and feel closer to her but it looks so vast and distant that I ended up feeling further away. I’ll talk to her tomorrow again on Skype. Here are two pictures she sent. 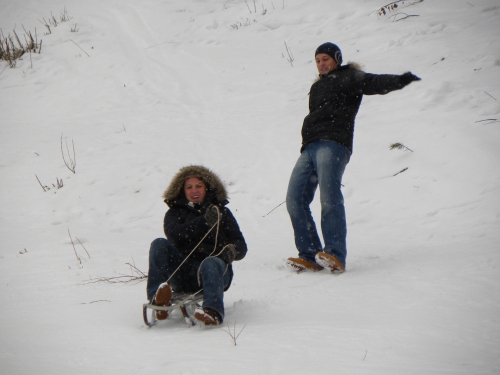 (Keeping up with her can be a challenge.) 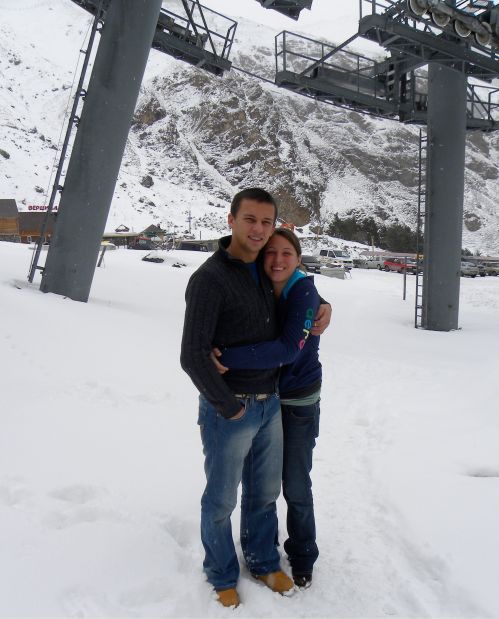 (Does he look like a spy to you? Sometimes I worry about that. Do those lifts look safe? I think not. )

Anyway. She’ll be gone for her birthday, too. Technically, winging her way back here on Singapore Air but not yet home. Daniel is in Ann Arbor, busy with his friends (actually, it’s a woman and I haven’t met her and I’m sure I’m not supposed to talk about that here at all) and he’s also getting ready to head out for a west coast tour in January with NOMO so I won’t see him for another while and I’m not happy about that, either. Rich’s girls (well, they are my girls, too, but we still sort of say my kids, your girls, whatever. Blended families. But we think of them all as “the kids.”) are in their respective places, with work and lives of their own (the nerve) so there you go. No children for Christmas.

Bud is in assisted living now, having made the transition from independent living. He’s in the same nice place and I asked him what the differences were and he said, “Well, there are two. One is they give me my pills instead of me taking them myself. (or not, somewhat related to the move). The other is, every fifteen minutes they say to me, “Bud, are you where you’re supposed to be?” ” He seems somewhat more vague but he is still cognizant of the loss of independence he enjoyed at Lost Loon Lodge. He does have a new “friend” of the female persuasion and I’m happy about that. When he talks about her, it’s ridiculously giddy and more lustful than I want to think about. It makes him a lot less lonely. But where did my mother go? She’s still around, in lots of nooks and crannies but you know, it’s kind of painful. Bud asked me to send him the folder with all my mother’s papers-her journals and press clippings from her environmental efforts and the obits and what have you- that he left in my safe keeping. He wants to share them with the people in his “retirement place”. I pulled them out of the file drawer yesterday and I just glanced through them; that was enough to let me know that I didn’t want to send them off directly because they might get misplaced and they might also be more upsetting to Bud than he’s thinking. But really, that’s not my decision to make. They are his papers after all. I guess I’ll send them to my sister and let her figure it out.

I am going on a bit here, especially considering I’ve been in the woodwork for a while. Ah, me. Anyway, back to the reason for the season. Late this afternoon, even though we had early dinner plans with our good neighbor friends, I drove down to feed Shadow and Thinman, the red shouldered hawks at Boyd Hill. They are my new charges.

Last season I had Wheezer and Stretch, the ESOs but now I’m hand feeding the two hawks as well. I drive through the south side of St. Petersburg to get there; I like the eclectic mix of bail bond places, liquor stores, community centers, Harry’s Hot Garlic Crabs and churches that I pass before I hit the lakeshore at the edge of the nature preserve, where it all changes to great blue herons, cormorants and gators. One of the church signs read, “Let Earth Receive Her King!” and I was reminded how we refer to Him as him and the earth as Her. The earth part makes perfect sense to me. At the risk of sacrilege, He, at least as the stories go, had more of the attributes that we generally think of as feminine. Nurturing, conciliatory, gentle and forgiving. I was discussing that with Shadow while feeding her slices of beef heart and she pointed out to me that she is the more assertive and dominant of the two Red Shoulders. She also pointed out that it is my religious holiday so it’s not entirely equitable that she will be having a fasting day tomorrow. In any case-Earth or King, both- appreciating a gift of this magnitude definitely transcends nit picky issues like gender. It’s important to accept a gift in the Spirit in which it is given.

In keeping with the spirit of the season (not the Christmas one. The bad economy season.) Rich and I decided to veer away from material goods this year and focus on the wonderful things we are blessed with (which don’t include health insurance or children home for Christmas). I made Christmas cards (of wool felt, naturally. Overly ambitious, naturally. Effen glue gun mess, naturally) and I packaged up gifts and Rich waited in line at the post office where we paid a lot of money to mail things priority only to hear that northern snows meant none of it was getting there on time in any case. And then we went shopping for each other. We set an absolute 50.00 limit on what we spent and settled on Target, drove together, got two carts and headed off in opposite directions. I got hung up in that dollar corral where it’s mostly Little Kitty schlock but I did find him a very high quality wooden and metal hanger for his belts and ties. I saw a lot of things I would pick for myself under 50.00- little kitchen gadgets and garden gloves but then I refocused and found about 5 more things Rich will like and checked out at 49.67. Rich got closer at 49.83. I guess I’m getting more presents. Then I went back through Target and bought the cats the most expensive gift- another fancy variation on the scratching post idea that they will ignore like every other. After that we went with the hoi polloi to Steak n Shake and had paper-thin hamburgers. My body hardly rebelled at all to such a minimal invasion of beef. That was a lot of fun, those few hours together, so we’ll probably make it a new tradition. Heaven knows we don’t need anymore stuff than we already have. Somewhere. In storage in Cincinnati. The main thing is this: Rich and I will be spending a peaceful, loving and quiet time together, just enjoying each other . For part of the day, we will drive down and visit old friends from Michigan who have a place on Anna Maria Island. It will be a good Christmas, even without children, parents, brothers or sister. I just miss everybody. That’s all.

And finally, in the end, along with trips north to see Bud and Abby’s graduation, I got so busy making felt art for gallery sales that I didn’t have the time or, ultimately the inclination, to make really nice gifts for all the people who matter to me most. Sigh. However, I did make you a card, with a dove on it. Here it is:

It’s past midnight and I can actually hear the church bells ringing because here in Florida we have our windows open tonight. It’s officially Christmas. Merry Christmas to you all. You are my friends and I wish you peace and health and happiness.

This entry was posted in Christmas stories. Bookmark the permalink.