Audrey knows I love it and, of course the only place in the world you can get it is at Zingerman’s in Ann Arbor, so one of the last things she shopped for before the annual BCMA meeting at Roberta’s cottage was a pound, sliced thin. And then she forgot and left it home. Despite a flurry of phone calls, everyone in BCMA had already departed for Lake Michigan and there was no one to stop and pick it up en route- until Roberta made her second trip across the state a couple days into our stay. So she detoured, drove to Audrey’s and snatched it out of the frig and delivered it to me at the cottage in Grand Haven. We didn’t eat it that day but hell would freeze over before I left it behind, so Roberta froze a block of ice in a bag overnight and Marion and I carried it along to Chicago. Where it went into Lee’s refrigerator Sunday night while I refroze the block of ice. We didn’t eat it with Lee in Chicago because we went out for Pakistani/Indian food on the eve of Pakistani Independence Day. The next morning, I repacked it on the block of ice and Monday that pound of pastrami moved downtown to Susan And Gary’s refrigerator while new ice was frozen. We didn’t eat it that night because we were watching Dan’s concert at Millennium Park.

At that point the pastrami was 6 days from slicing but still pristine, wrapped and perfect. So Dan and I packed it up, on ice, and drove the pastrami to Oshkosh, b’gosh.

Today, we brought Bud out and away from his spot at Evergreen Rehab for a change of scenery. But it’s hard. He can’t walk all that far. He needs to be near a bathroom. He tires easily. Sometimes he’s muddled. So we’ve just brought him back to our room at the Hilton Garden Inn. I swiped a couple of extra bagels at breakfast. Went into the bar and borrowed some popcorn baskets. Borrowed a knife to slice a tomato purchased at a roadside farm stand back in Michigan. Bought two bottles of bad beer for the three of us. Had a couple of Red Haven peaches. Bud just announced that it’s the best meal he can remember having, ever. I’m not sure about Bud’s memory, but this is one of those photos that speaks a thousand words. 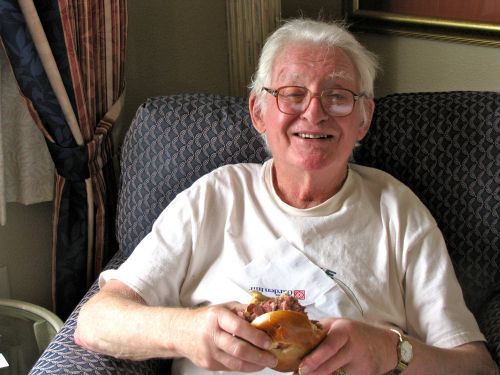 This entry was posted in BCMA (Book Club, My Ass), Cast of Characters, Food and Drink. Bookmark the permalink.