Before this gets juicy…

I go to the gym to exercise out of the heat and sun three or four times a week. This morning, while on the treadmill at the gym I spent some time thinking about bodies, mine in particular, although I was also looking around and noticing others. There’s a gaggle of middle aged Asian women who come every morning clad in what my grandmother called house dresses and flip flops. They monopolize the stationary bike section, chattering away and watching Regis on the TV. (Clearly, this isn’t like the Eastbank Club, Obama’s and Oprah’s hometown gym, back in Chicago). There is also the usual bunch of young thangs who wear lots of makeup and exercise in spandex from Victoria’s Secret and don’t sweat. In any case, if I’m not in a yoga class I try to clock 3 miles on the treadmill and then about 20 minutes on weights. This level of exertion is just barely stemming the current tide level and I imagined the tsunami if I stopped exercising altogether. My mind drifted to the fact that I’m 5 pounds heavier this year than I was last and ten pounds heavier than I was five years ago. The treadmill is really boring so I did the mental calculation: at this rate I’ll weigh 385 pounds by the time I’m 85. Great. Shades of Gilbert Grape. I’m sure my body is missing the three flights of stairs in the Chicago condo. I typically went up and down about 30 times a day and I also walked a lot more in Chicago, especially around the zoo.

The last mile or so,  I started mulling over this skin cancer issue and the business of exposing myself on the www. I’m sort of ambivalent about it because, having said I would post photos, it means I have to, well, put pictures of myself up here. And not at my best, either. (You’ll note there’s no profile picture in the sidebar and those of you who know me on FaceBook know that I look a lot like a Heron.) I’m not particularly photogenic to begin with but of course,  that’s not really the point of writing about skin cancer. Still. I think the decade between 50 and 60 is a tough one for women. Without effort I was ticking along quite nicely, in a very average looking sort of way, but now things are sagging and pooching and getting blotchy and if I think about it too terribly long it gets quite discouraging. I’m the first to agree that beauty is about inner grace and yes, it’s only skin deep but you know? It’s my skin, my nose for pete’s sake. So there you have it- the beginning of the big whine. Tomorrow, I’ll start with the series on the basal cell and Mohs surgery. So brace yourself. I’m just saying.

Sophie could care less that, with age, she is getting a bit of a ‘cat skirt’- that charming flap of feline belly that goes from side to side when she trots. She’s happy enough, eating lizards and dozing the days away, with a little chase and romp in the evenings. She and McCloud perk up about 630 or 7, have some dinner and race around. That’s when Sophie likes to go out and hunt little anoles and bring them in as presents. The best McCloud can do is snare balls of yarn. He pretends they are big rabbits he’s bringing us with all sorts of yowling fanfare so we go along with that. “Wow! McCloud! What did you catch? That’s a big bunny! Thank you so much!!” Unless it’s an expensive skein of silk/merino blend, in which case I yell, “Dammit, cat! Cut that shit out! Why can’t you catch a real rat or something??”  McCloud remains permanently baffled. 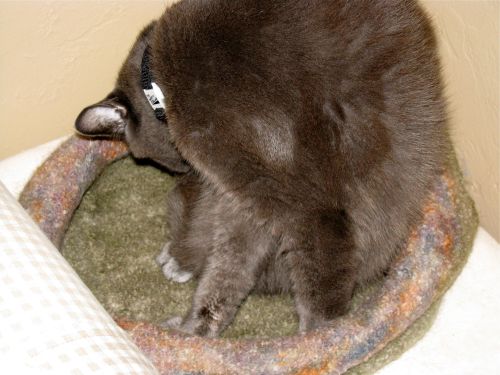 Sophie is very appreciative of her felted cat bed and sleeps in it all the time, now that I took it off the luxe cat tree we bought at Petco. Yesterday, after they’ve stone cold ignored it for 3 months, I decided to put the cat tree out in the alley so maybe someone with a better cat would take it home. It was by the back door with other stuff going out to the garage and then, when it looked like trash, Sophie decided to use it. She spent the whole night sleeping there. 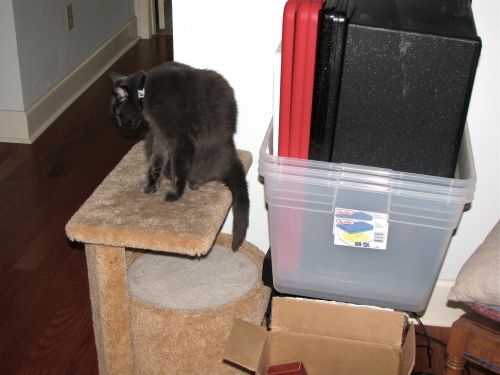 One last bit of meandering. This is a small house so I’m trying to avoid too much superfluous clutter. The bins and tubs of felt have been multiplying as I get busier felting so when I saw this pattern file cabinet up for grabs at the fabric store the other day I dragged it home with the help of my friend, Elaine.

(Yes, I have two calendars. One has zoo babies and one has birds.I couldn’t decide.)

It was pretty scuffed up from years of use but very heavy duty and solid (stamped Simplicity Pattern Co. on the inside) so I figured some spray paint was a good investment. Next year we’ll probably haul it to the North Carolina house and put it in the basement (A basement! Hooray! Lordie, do I miss a basement.) but for now, it’s hulking unceremoniously next to that beautiful Frank Lloyd Wright table in the study. Ah, me. But it holds a lot and I managed to get about 8 big plastic tubs out of the way.

While I’ve been getting high on spray paint fumes, Rich has been off on a business trip. His business trips take him to places like the Super Bowl, U.S. Open and so forth. Tuesday he went to the All Star game with those beer people in St. Louis. It’s a tough job but I guess somebody has to do it. 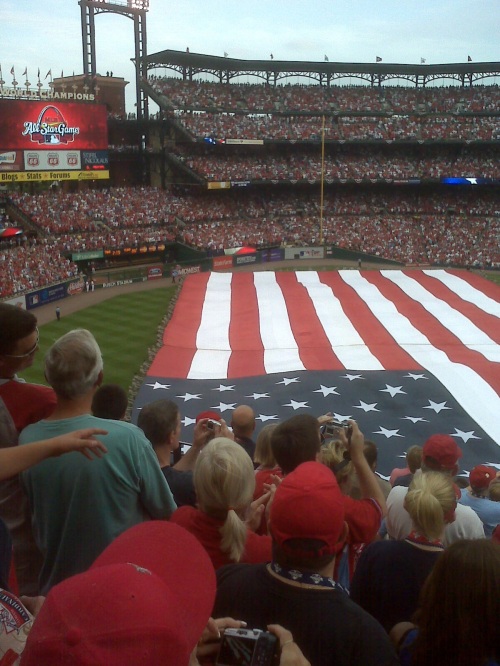 (He sent me this on his Crackberry. A sea of Cardinal red…)

This entry was posted in Uncategorized. Bookmark the permalink.

11 responses to “Before this gets juicy…”