Once there was a way to get back homeward

Everyone is on the road today and there has been no Golden Slumber around here for a while now. (click. you’ll smile)  Daniel, in particular, is stressed out with touring. They just completed 11 cities and 4 radio stations on the west coast, flew directly from Aspen to Chicago and on to the Netherlands and Denmark. 7 concerts there, back for 8, back to France for 7, back for more. In August he’s back to Spain giving several solo concerts. The night before last, Dan’s phone gave out and with no time to replace it, he feels even more out of touch. When I spoke to him just before his flight to Europe he broke a bit and said where he really wanted to be was with his grandpa, helping him in rehab.

I always miss Dan but more so when he is on tour and the best I can do is follow his itinerary, city to city. When they were in Portland, Inger Klekacz took some beautiful photos of NOMO, as a group and individually. Being able to see Dan with a range of expressions both tugs at my heart and helps me feel closer. If you click on her link you can see some of Inger’s exceptional portrait photography. I’ve ordered some enlargements and will send a couple on to Bud for Father’s Day. Catch you from Moving Central in Chitown. 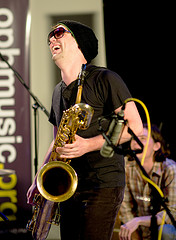 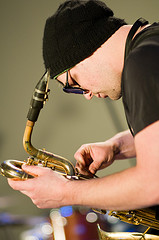 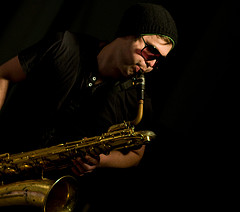 This entry was posted in Beyond the Brick Wall, Cast of Characters. Bookmark the permalink.