You say Spider, I say what? er…

I’ve been down and out with bronchitis- darn those homeless mugwumps, anyway. Today was a Valentine’s Day tea party for them, but I missed it. I’ll return soon with another animal themed lesson. I’m going to teach them how animals can provide for us without going to the butcher shop (no, no, I’m not pointing a finger at you) by taking in alpaca and llama fleece and we will make felt. For that lesson we’ll make colorful felt beads, using fleece, hot sudsy water, unsweetened koolaid powder and old nylon stockings (such a better use for them- wrapping up colorful wool beads between knots while they dry in the sun!) and then turn them into necklaces and pendants.

But for now, I’m pretty lackluster in the energy department so I’ve been staying house-bound and finishing up the taxes. Abby came by and did her FAFSA and then zoomed off again to one of her 4 jobs. She works too hard but I’m not going to be the one to tell her that as long as she continues to do so well academically. Mostly, it’s on my mind to get healthier prior to the onslaught of company this weekend. I’m very excited- we’re having Bud for his 80th birthday, my brother, Bruce (aka Uncle Buck) will come down, Rich’s Melissa will join us and Daniel will come to Florida for the first time. He’s coming off tour in the Northeast and he’s anxious to be out of the cold and snow. I think NOMO will be putting out their fourth album on vinyl; they’ve just finished some long sessions in the recording studio.

Rich and I, and our friend Susan, who was also a bit under the weather, agreed to sit quietly at the movies Sunday afternoon. We went to see There Will Be Blood. Oh, my, oh my, oh my. Very harsh, very stark, and Daniel Day Lewis definitely deserves that best actor award. I thought the film was a powerful and fascinating portrait of good and evil. It’s based on an Upton Sinclair novel about the hard scrabble times of oil drilling out west in the early part of the last century. Juno was still my favorite film of the year but I have to say that the acting in this film is unsurpassed.

Anyway, we were just picking up Susan when I noticed this on the the windshield of the car. I know now that she won’t be a stranger to my Florida friends but we were sort of freaked out. What is that??? We actually turned around and drove slowly the couple blocks back to the house so I could photograph her and set her loose. I think she was pretty well hunkered down on the windshield but I feared the force of wind from driving would knock her awry. So? What is this? I researched it and found the answer but I’ll be interested to know what words you choose for that web search. Let me know. I’ll post the answer shortly. 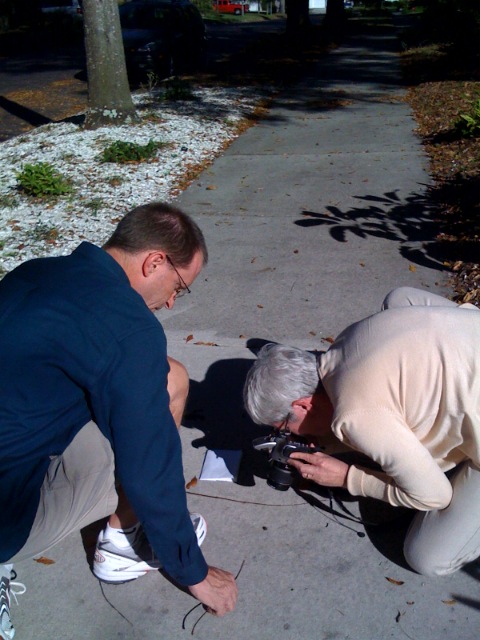