I have one in mind, but I feel a need to play catch up. Since last we chatted I hosted the neighborhood holiday party here in the land of Oz (Park). I’m always surprised- and alarmed- when I invite people and they actually show up. Every one came and this tall skinny brickhouse, that often seems dark and stark to me, turned into a cozy candlelit gathering of new Chicago friends.

For years, I’ve been in love with blown art glass. I own an early piece of Dale Chihuly- the real deal- and some other very nice glass and I’ve always thought that turning sand to glass is a most amazing accomplishment. Back in October, for my birthday, Rich gave me a two day course in glass blowing at Chicago Hot Glass, so the day after the party I was up early to learn a new craft. Whatever dream fantasies I had about glass blowing fairly quickly turned into a nightmare. For the very first time, I found myself up against the wall in terms of strength, coordination and, frankly, age.

Glassblowing involves holding a five foot long 15 pound metal rod, dipping it into a 2200 degree white hot furnace of liquid glass, scooping up a very precise amount and getting it out of the furnace without dripping it all over the place. The only way to accomplish this is to continually turn the pipe and, given the physics of leverage, this is more or less difficult depending on where you hold the pipe. The end you stick in the furnace is glowing red hot, but how hot is it, say, two feet down the pipe? I was constantly fearful that it was way too hot. The other challenge for me came with a lack of depth perception. It was well nigh impossible for me to see the glass level in the glare of the furnace, even with sunglasses. After confronting the challenges of getting the right size blob of liquid glass out in the open I had to, well, blow it. Fast, before it began to cool. If you are over 50 years of age, you might remember a time when it was substantially easier to blow up balloons. Now imagine blowing a white hot molasses-like balloon at the end of a heavy steel pipe. I am still full of hot air, but blowing a precisely sized and shaped bubble at the end of a pipe that is too long to see the end of, at least from my vantage point- well, you’re starting to get the picture here. And don’t forget to keep that pipe turning at all times. Always.

Glass blowing commands an integrated balance of grace, muscle, and coordination. I also suspect it is a craft that requires an incredible amount of time and patience before you can relax enough around that kind of heat to settle into a comfort zone that allows you to turn the corner into creativity. I went home after the first day and Rich was all excited to hear about how much fun I had- and I burst into tears. The second day began with an ice storm and I want to tell you that I was one hair breadth away from not going. That close. This was one of those times in life where your love for another person nudges you forward, because if Rich hadn’t wanted SO much for this to be a great experience for me I would have quit. But I didn’t. I went back and joined the other three (very young art school) students for the second day. Twice I took a bathroom break to cry in private and splash cold water on my face- it was that hard and that frustrating. I worked on numerous pieces and I ended up with two paperweights and one small bowl. That small bowl seemed to weigh a hundred pounds when it was a work in progress; the ones that seemed to weigh only 90 pounds were too fragile and the bottoms broke out when I tried to snap the pontil rod off.

In the end, it was a great experience but not of the sort originally planned. I failed at this, miserably and I also realized that I have reached a point in life where I am limited by age in learning a skill. I guess that shouldn’t be such a big deal, that realization, but it was. A life lesson of sorts. Rich took one of the paperweights to his office, exclaiming over it’s lumpy lopsided dark purple beauty. The small bowl, I’ll keep as a memory of those two days and the other paperweight I will give to my good friend from book club. It is vaguely obscene. It was supposed to be a calla lily in there-I’ll show you tomorrow-but you’ll agree it looks more like, um, parts. From times gone by. She’ll get a laugh out of that when she feels like laughing again. While I was struggling with hot glass, she was at the hospital with her dying husband. He did die that day and I thought about how I had just been with her at the Lake Michigan cottage two weeks earlier and her life was one way and now it was not. Remind me to tell you about the flowers Martha Stewart sent to his funeral.

Say! I have an idea! Let’s invite 1247 (by actual count) strangers to come look at the inside of our house! My friend had a ticket to fly to Florida to be with us for the historic house tour but she stayed home to say goodbye and begin the process of mourning and I flew down to open the doors to the bungalow. I really wanted to be with her and vice versa but that didn’t happen.

The week in Florida was hectic and hard but also lots of fun. Fun and festive, yes indeed. We finished up all of the four trees: one with endangered species ornaments, one with sea life, one antique German feather tree with old mercury glass bird ornaments from my grandmother, and one with nothing but white sand dollars tied up with blue satin ribbons. We finished the outdoor lights including the polar bears, the geese and the penguin. I made a wreath with hundreds of feathers and set out the three generations of Steiff animals and Mary with Jesus on the mantle. I set up the little Mexican creche that for twenty-five years includes Daniel’s gift to the baby: a Matchbox John Deere tractor. We went to parties and our Chicago neighbors flew down and we ate, several times, at the 4th St. Shrimp Store.

(In this picture you can see the fine watercolor of the house they gave us as a gift for having the house on the home tour which is a big fundraiser for neighborhood preservation and improvements.)

All during these activities this past month I lived in denial of a nagging tooth ache. A childhood filling that was refilled five years ago had cracked but, you know, these things sometimes heal themselves. Right? I made the call from the cab on the way back from the airport and a dentist, an endodontist and an oral surgeon later, I’m nursing a bone graft in my jaw and stitches stretching from the front of my gum into my soft palette. Enough said, except now I think I really will lose those few extra pounds. I’m thankful that we have leftover beverages from the party that started this post. 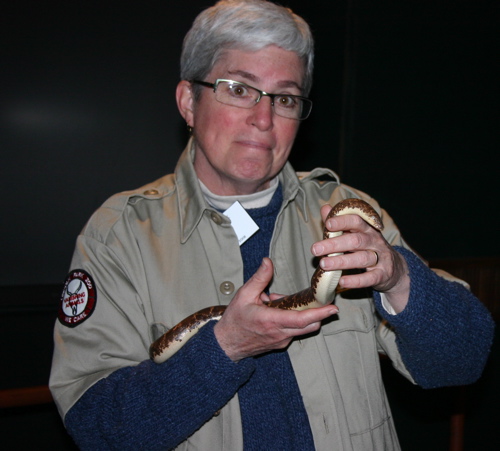 Today was my last day at the zoo for a long stretch. It was very very cold but snowy and sunny so I tucked my mouth down deep in my coat collar and made the rounds to visit my beastly friends. The puma girls were loving the snow, plowing through it and pouncing on one another. The snow leopard and the Pallas’ cats seemed content to nap in it and Adelor was kept inside, where he complained a bit.

I will miss them but Hannibal, the hawk and the pelicans and the manatee help offset things and I’ll be back to work with the children and women of Family Village while enjoying the warm sunshine in Florida. Christmas plans are all goofy because Bud is in the hospital getting his electrolytes squared away (Bud update soon- he’s okay and as heartwarming and quirky as ever), the decorations are all in Florida and there are tentative plans to gather in Kalamazoozoozoo at my sister’s home. We shall see.

I like this photo I took today of the farm at the Lincoln Park Zoo with the cityscape behind. Knowing there is a limit to how much winter I face, I thoroughly enjoyed the view. 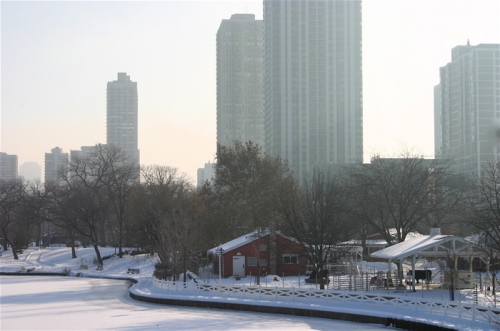 This entry was posted in Beyond the Brick Wall. Bookmark the permalink.